“It seems counter-intuitive but when the AVC scene is breaking down, the reason you see the artifacts is because it [the codec] is compressing the data harder. It is over-compressing because it does not know what to do,” Eksten explained. “When you are over-compressed you see the blocks. PERSEUS fixes this issue and accomplishes it [the scene composition] without the usual artifacts and at less bit rate. It does not use blocks. When you put the two codecs together it is a superior result from a visual point of view.”

30-50% reduction in bandwidth for backhaul of visually lossless HD promised with P.Link


20.09.2016
Guido Meardi, CEO and Co-Founder of V-Nova, highlights the momentum behind the PERSEUS compression codec, explaining what integration with Microsoft Azure and Windows 10 means for the market, why Eutelsat has taken an equity stake in V-Nova, the impact of further independent compression performance verification, how PERSEUS has revolutionized mobile video in India and the role for this codec in VR and 360 video. 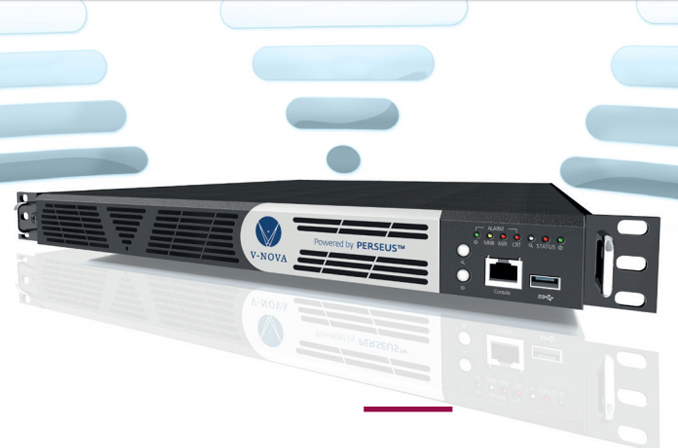 PERSEUS 2 provides higher density, more device support and can be used on top of HEVC and VP9

PERSEUS 2 is a more efficient codec than its predecessor and one of the results is even better picture quality within crucial bandwidth thresholds that make or break the business model for new services. It enables better mobile video at 100 kbps to enable comprehensive reach, including across 2G networks, and it now supports better quality at 1Mbps for monetizable full HD video on mobile. There are picture enhancements at 2Mbps for HD on DSL and at 10Mbps, a threshold that opens the door to multichannel UHD sports on satellite and cable.

According to Fabio Murra, SVP Marketing at V-Nova, (the company behind PERSEUS), the new generation provides a step-change in performance. “We have done a lot of work to improve computational efficiency.” This results in much greater density. More density equates to lower CapEx or OpEx, whether video processing is on-premise or in the cloud.

http://v-net.tv/2017/04/06/perseus-2-provides-higher-density-more-device-support-and-can-be-used-on-top-of-hevc-and-vp9/
Thanks to improved codec efficiency and a lighter decode footprint, PERSEUS can also be used with a wider range of chipsets and browsers. Decoding is now supported in the HTML5 environment. Set-top box chips as old as nine years can process the codec. V-Nova is already supported on both Broadcom and ST SoCs. Murra says: “We want to be compatible with devices doing back as far as possible. We cannot wait for handset and television replacement cycles and we have to get the best that is possible from the device ecosystem.”

V-Nova: The strategy behind PERSEUS 2 – and why there’s still room for lots more compression efficiency
...
“We know that in today’s world, people want to stream more and more channels. We needed to lower the cost-points,” said Meardi. While PERSEUS was fast, V-Nova knew it could make PERSEUS 2 even faster, and that translated into several benefits. “The first one is very, very low cost of encoding, low processing-power utilisation, low electricity [demand], and high densities. […] Yes, it encodes Ultra HD p60 broadcast quality at 10Mbps, but the most important thing is, it costs so much less.”

The second benefit PERSEUS 2’s speed enabled was making it easier to use on all platforms, noted Meardi. In initial deployments, PERSEUS “was working very well in closed environments like an IPTV deployment or in app deployments.” But V-Nova realised that video delivery was moving to a more fragmented environment, where “HTML-5 was taking over. […] So with PERSEUS 2 we created and we are presenting at IBC, the possibility to decode PERSEUS within a browser, within all the HTML-5 ecosystem, using simple JavaScript decoding.”

Meanwhile, PERSEUS’s ability to work in two different modes, as a standalone video compression system [PERSEUS Pro] or piggy-backing on existing codecs to improve their performance [PERSEUS Plus], was expanded. Where PERSEUS Plus previously worked in tandem with H.264, at IBC the next-generation platform was shown also supplementing HEVC. “In general, PERSEUS 2 is amenable to any type of base encoding – so when AV1 becomes available, […] it will work also with AV1. It [also] works on top of VP9,” said Meardi. This means, he claimed, that for operators, “PERSEUS is actually the cheapest and simplest option to immediately achieve massive benefits – because it’s compatible with the whole eco-system, it’s a simple software upgrade and doesn’t change anything.”

Finally, V-Nova has optimised PERSEUS 2’s performance around specific operating points, to reflect the common bottlenecks in today’s video distribution networks. “We’ve understood those limits over the past two years and we optimised PERSEUS specifically for those operating points. That’s why when we say we do OTT 720p HD at 300 or 400KBps, that’s not just a number picked at random. […] If you want to do mobile video, very often the majority of people have a maximum 300, 400 or 500Kbps.” Meardi notes that even in central London in peak hours, “very often you’re below 600KBps even with 4G.”
...